Sleeping Beauty, Snow White, Cinderella, Ariel, Belle and Jasmine – the Disney princesses have delighted little girls for generations. Now your little princess can have the room of her dreams with Disney princess bedding and accessories. There are even choices with the newest additions to the group – Rapunzel, Merida and Tiana!

The focus of this collection is definitely on the princesses as a group. There are other pages that feature bedding with just a single princess if that’s the direction you’d rather go.

And boy – I hope you like pink. Because that’s the color you get with Disney Princess. Pink, pink and more pink. It’s the typical background color for all of these bedding sets, with usually three of the girls featured in the center. That’s the fairly standard set-up for these bedding sets. Upside is there are usually lots of secondary colors to work with – blue, purple, green, yellow for the most part. The most common trio is Cinderella, Bell and Aurora, probably because they closely align with the primary colors. It’s rare to see Snow White, unfortunately. I think because she never gets a fancy ball gown in the movie.

If you aren’t ready to invest in a bedding set, do take a look at the cool pillows and blankets, which can be used to provide a princess touch to any other bedding set. Given the wide range of colors in the dresses the girls wear, you can easily make existing bedding fit into the theme.

Get ready for pink!

What’d I tell you? Pink and more pink. The newer sets are starting to feature four princesses, though, at least on sets for bigger beds. In most cases, you’ll see flowers and scroll work and castles worked into the designs as well.

The use of different princesses does allow some leeway in how you decorate the rest of the room, fortunately. You can work with the colors from the gowns they wear in putting other items around the room, or choosing what the wall color could be. 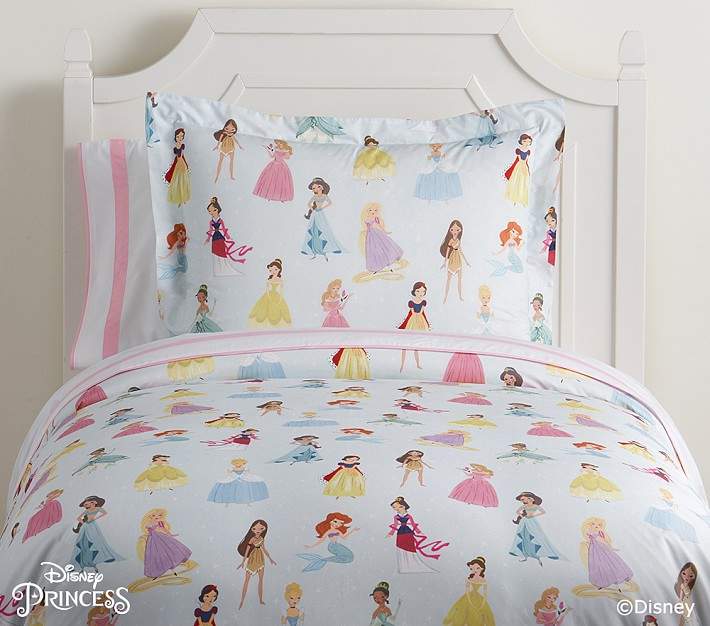 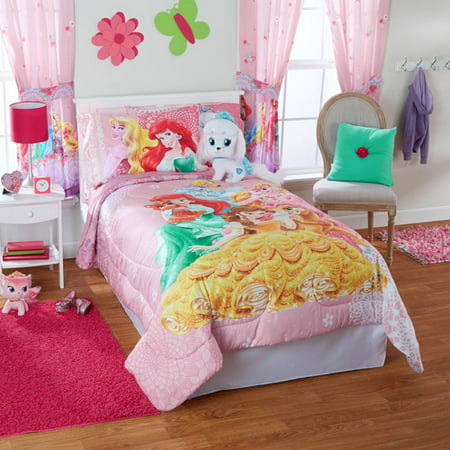 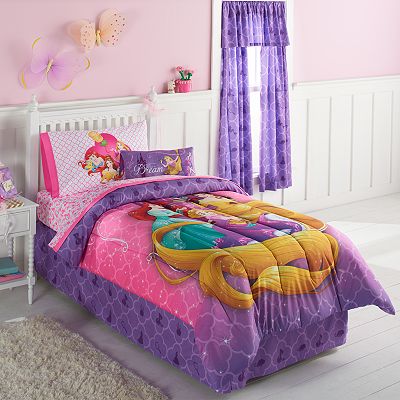 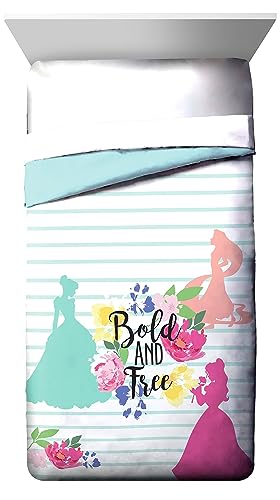 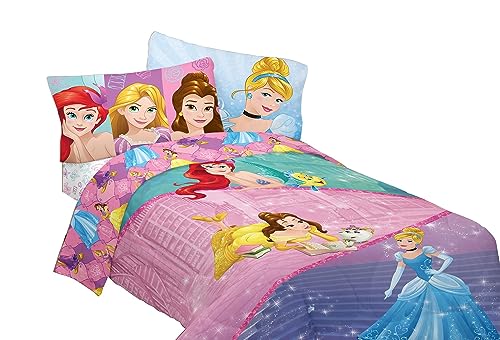 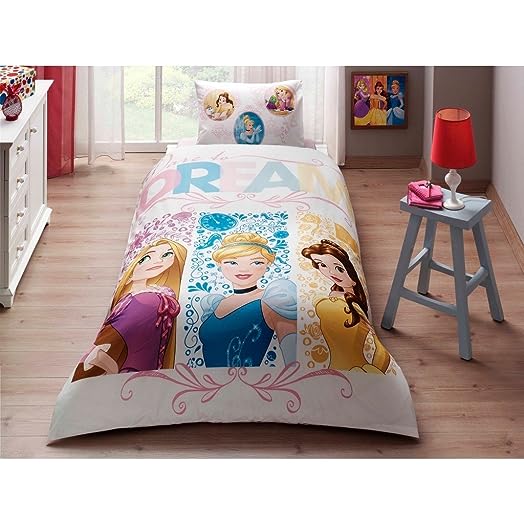 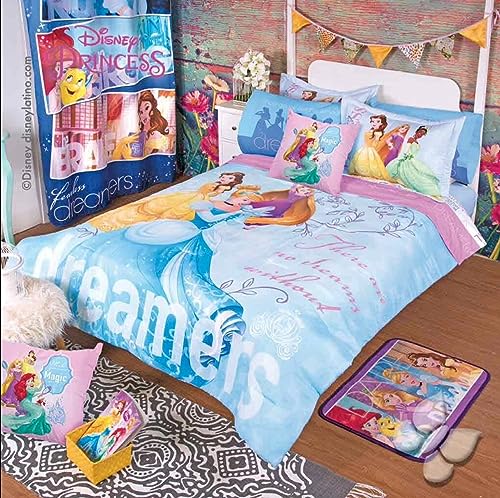 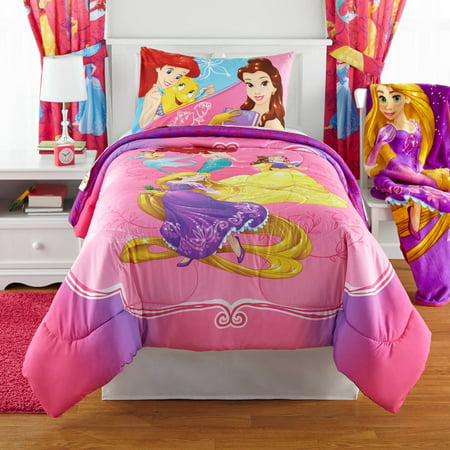 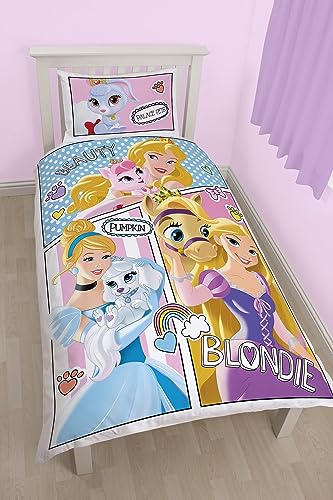 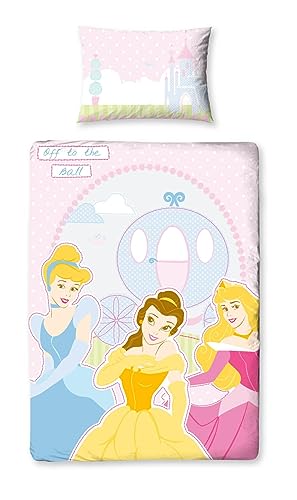 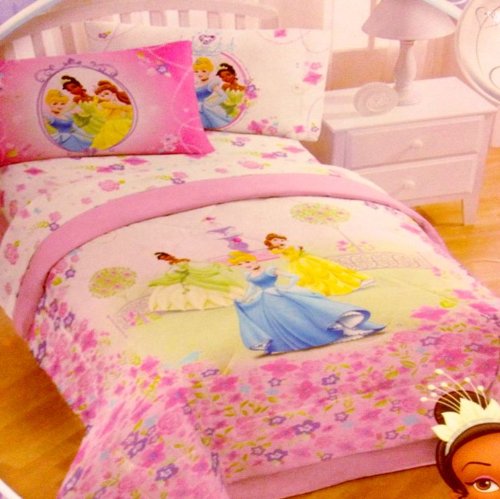 The toddler years tend to be the ones where little girls are completely obsessed with all things pink and princess. Especially Disney Princess. So it’s the perfect time to think about indulging them with some Disney Princess toddler bedding.

The sets here vary in terms of which princesses you’ll find, although Cinderella tends to be front and center on most. And you’ll certainly find plenty of pink to go along with it. 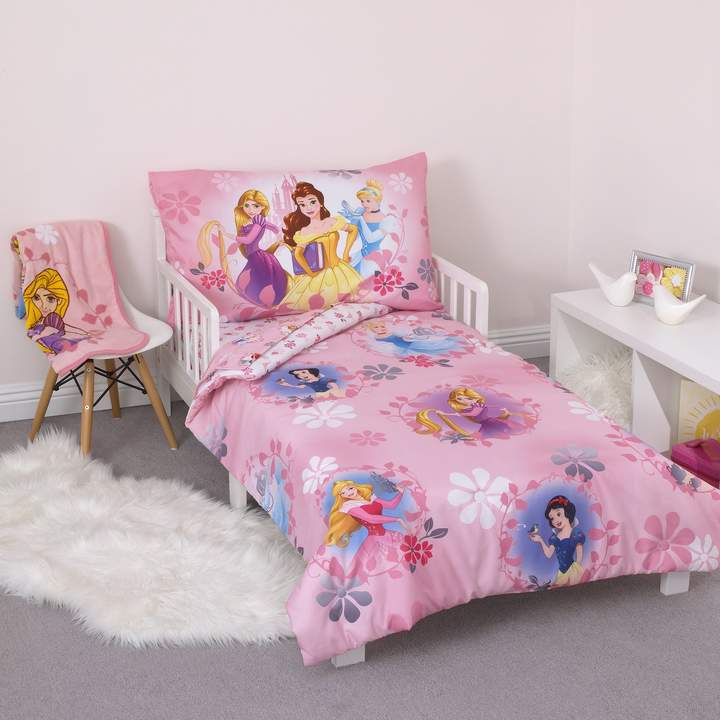 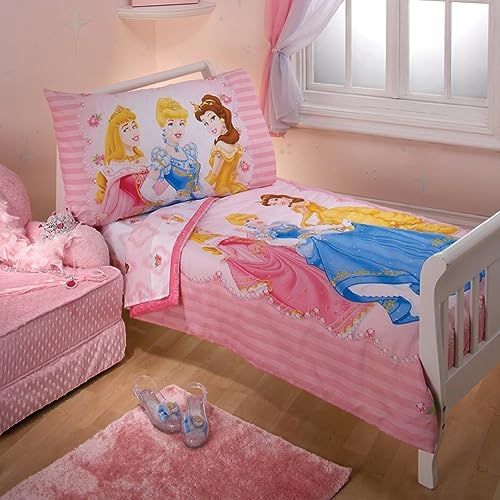 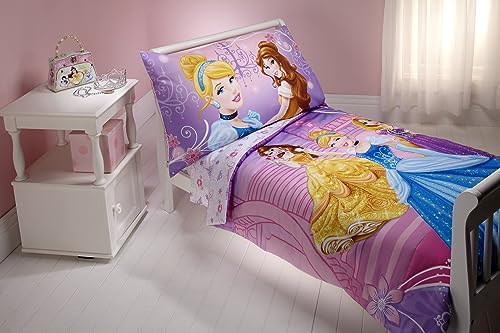 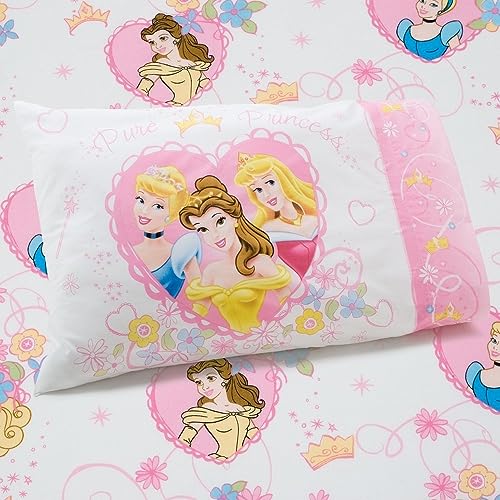 A few more white backgrounds available here, since they’re meant to pair with the pink bedding above. Check the names to match them up with the bedding sets (it’s a game!). 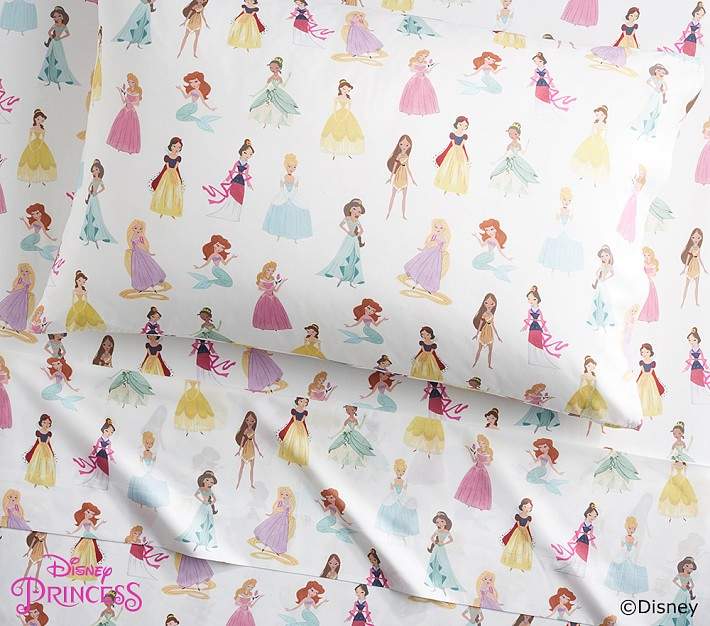 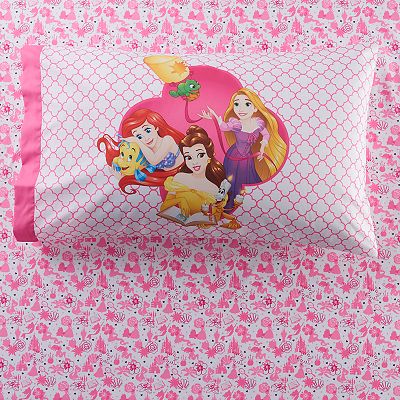 Disney Princess Lead with your Heart Sheet Set
At Target.com 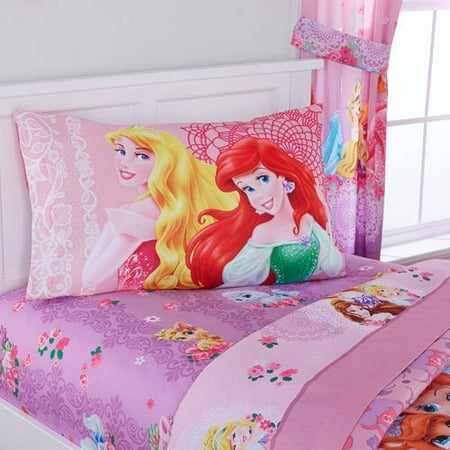 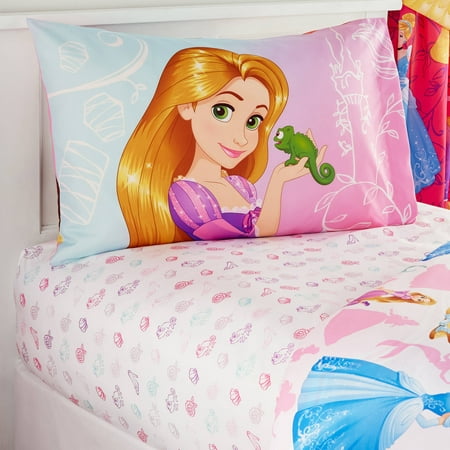 
This is an interesting collection, really. Tons of pink, but the design choices for these Disney Princess blankets always throw me. No clue how they decide which ones to put on the blanket and there still aren’t any with the entire group. 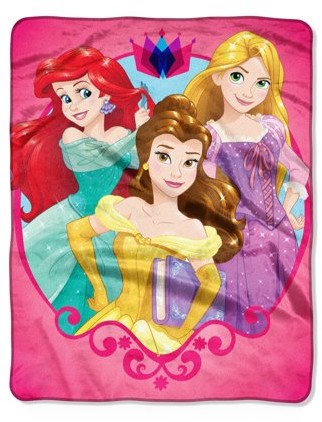 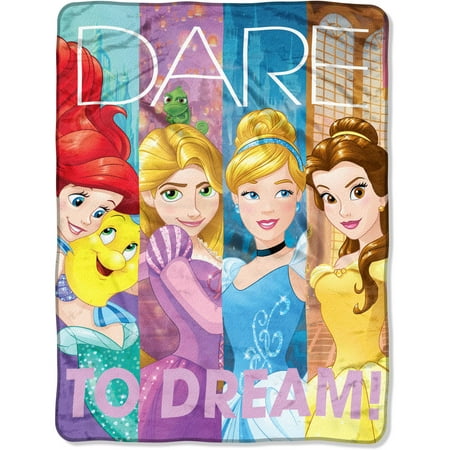 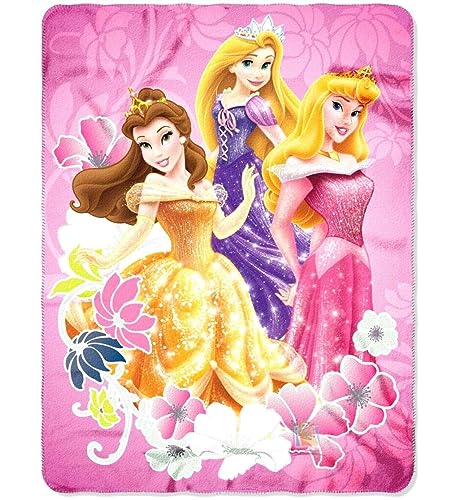 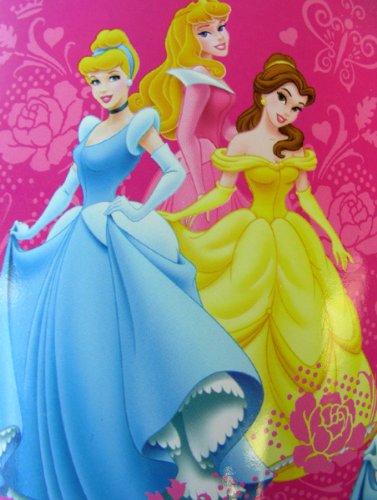 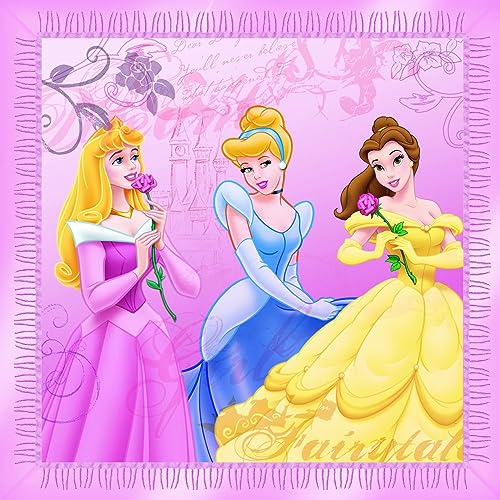 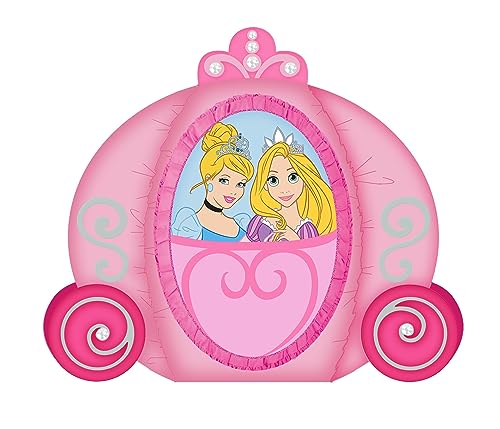 Disney Princesses Away We Go Cuddle Pillow
So cute! Shaped like a carriage
Cinderella and Rapunzel on one side, Bell and Aurora on the other